Home | About Us | Discover Equus | How Foals Survive 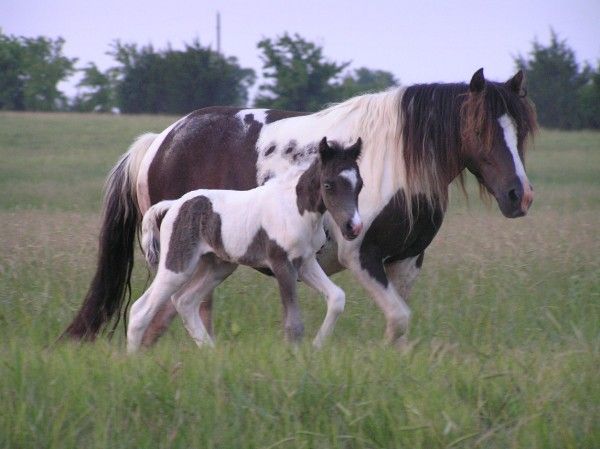 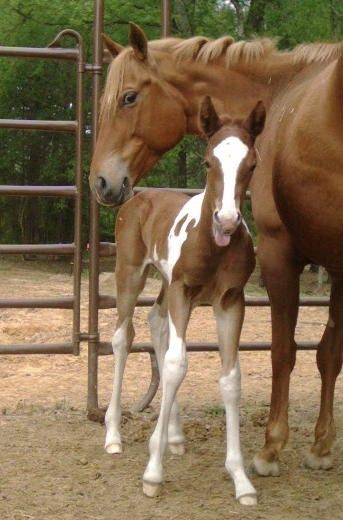 Photo by Rebekah L. HoltEveryone loves foals. Who can help it? With their long legs and fluffy manes and tails, foals are amongst the most iconic and beautiful of baby animals.

Foals are not just adorable, however. Everything about them – from those endless spidery legs to the way they sleep flat on their sides – was designed by God to help the next generation of horses live on.

Let’s start with the most striking feature of foals: the legs. A foal is born with legs approximately 90% of the adult length.1 However, the legs are not as thick or solid as they will be when the foal matures; in fact they look so long and slender that it seems a miracle they can hold the foal up. The legs often seem to get in the foal’s way. Many foals will forge or over-reach – striking the front hoof or leg with a hind hoof – simply because the legs are too long for the body. They will also have trouble learning to graze, having to resort to various contortions just to get their noses down to grass level.

God didn’t just give foals long legs to make them look cute! Going back to one of the most basic elements of equine nature, horses are flight animals. Unlike many herbivores, such as cattle and antelope, mares will not hide their foals in the grass and leave them. Foals can be seen running with the herd from day one, and if there is a threat, their first and best defence is to flee.

If a foal were born with legs in proportion to its body, like a calf or puppy, running would be hopeless. He would drop behind in seconds and become vulnerable to being eaten. But God gave foals legs almost as long as their parents’ and tiny, light bodies, a physical combination created for speed and hence, survival. They can easily keep up with the herd, taking huge strides. The gawky creature fumbling around in an attempt to graze turns suddenly graceful with a burst of speed. 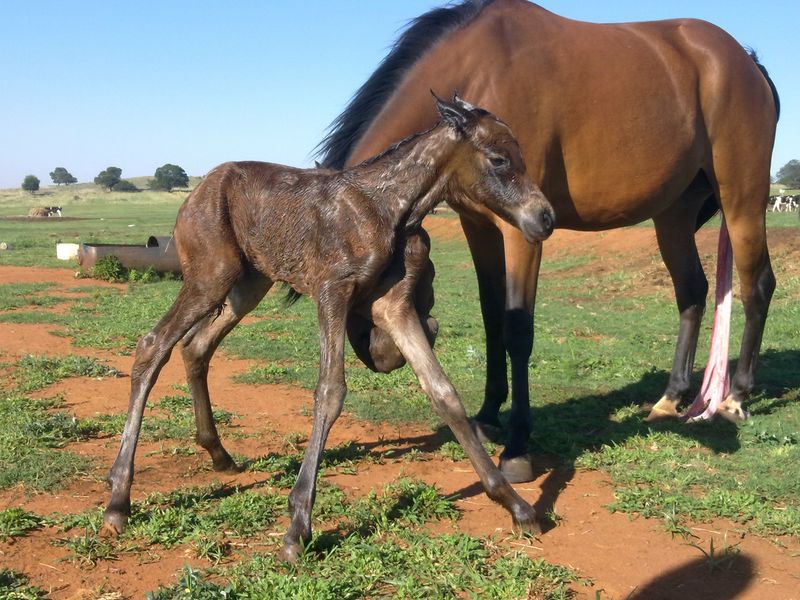 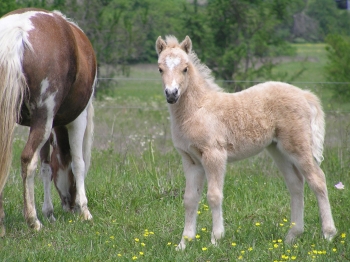 Photo by Rebekah L. HoltAdult horses spend only two and a half to three hours out of every twenty-four lying down to sleep.2 This is because they can sleep standing up, and so go from fast asleep to galloping in a split second. God designed a series of joints and tendons in the horse’s pelvis to coordinate and form the Equine Stay Apparatus. This means that the horse can stay standing up with minimal muscular effort by locking its joints into position, which is why they don’t simply collapse as they fall asleep the way a human would do if we fell asleep on our feet.3

Like most babies, foals need more sleep as they grow. It takes them several months to learn to sleep on their feet, so they spend much of every day lying down and sleeping. Often they will sprawl flat on their sides with their legs stretched out, close beside their grazing mother, dead to the world. They sleep much more deeply than adult horses, and hence are most vulnerable when sleeping.

The remedy for this vulnerability is in the way God designed horses’ herd behaviour. Mares will almost never leave their foals while they are sleeping. Often in a group of mares and foals, one mare will be selected to babysit a group of sleeping foals while the other mares go off to graze. She will only leave them when they are all awake. Some mares will even babysit when they don’t have a foal of their own.

This way, the adult horse can call or nicker to the foals when danger arises, preventing them from becoming easy prey.

Adult horses sleep standing up because they are so heavy that it takes them several seconds just to get to their feet. Foals, however, are so light that they can spring to their feet in an instant and gallop away.

God designed foals to have certain behaviours that help them to survive. For example, everyone knows how curious a little foal is. They are always licking, chewing, tasting, and smelling new things and will explore a new object until thoroughly bored. Everything from a fence post to a new member of the herd catches their attention, and this is one way they have of learning vital skills for survival. 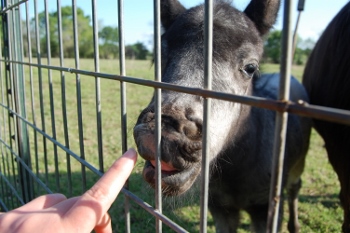 Photo by Rebekah L. HoltAlthough God has “programmed” certain instincts into horses – most importantly, the herd instinct and the flight instinct, neither of which the foal has to learn – they are not born knowing everything. They learn that water is for drinking and grass for eating; they find it out by exploration. Actually, some foals will play in the water trough for hours, thoroughly drenching themselves, before finally learning to drink the water.

They will also learn behaviours by copying them from other horses in the herd. This is one reason why foals with “tame” mothers will turn out tame themselves. They learn from their dams that there is nothing to fear from humans.

Often, foals will be nibbling grass long before they actually have the teeth for eating it. Some will pull it out by the roots and suck it before spitting it out. By the time their incisors have come out – usually around a week of age – they will have acquired a taste for grass, the ideal food for horses. When they’re weaned around six months, they’ll be grazing just like adult horses. 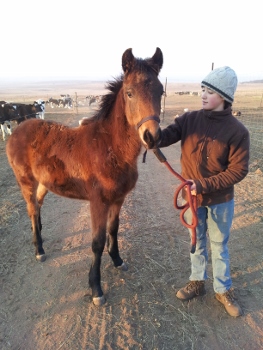 Photo Courtesy of Firn HydeMany horse trainers and owners will start working with the foal from only a few days of age. When foals see humans handling their dams, they will quickly learn that people are not to be feared. Their natural curiosity can also be used to the trainer’s advantage; sooner or later many foals will come up to you of their own accord, simply to find out what you are.

Photo Courtesy of Firn HydeFoals can also be imprinted when they are newly born. In the same way as the dam imprints herself on the foal’s memory by licking him clean after birth, the foal’s trainer can come up to him and touch him before he can run away when frightened. The foal will then learn that the trainer is not harmful.

Because they are herd animals, like all horses, foals will always want a leader in the relationship with their trainers.4 If they have the slightest shadow of doubt in your leadership, they will try to take over themselves. Foals exhibit dominance in varying degrees, from leaning their weight against you to biting, kicking and striking with the forelegs. Such habits have to be nipped in the bud, as what’s cute in a foal won’t be so cute in a 16hh three-year-old.

Disciplining a foal can be a most unpleasant business for the handler. No one likes to scold or push away a baby – one feels like such a bully! Deuteronomy 8:5 says “Thou shalt consider in thine heart, that, as a man chasteneth his son, so the Lord thy God chasteneth thee.” Just as God disciplines us for our own good, just as our parents discipline us for our own good, we should discipline our horses for their own good. Spoilt, pushy horses are often even more dangerous than wild, untouched horses because they have no fear of or respect for man. Dangerous horses seldom have bright futures, unless someone is willing enough to put in the time and effort to correct their behaviour. 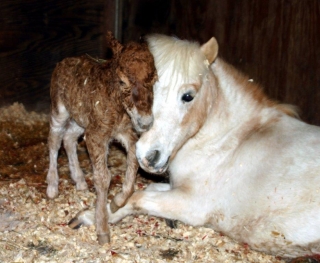 - Foals can stand within an hour of birth.

- The first milk the mare produces after the foal is born is called colostrum. This milk is packed full of essential antibodies that boost the foal’s immune system and help it to stay healthy.

- Horses grow in fits and starts out of proportion, and often even the most well-bred young horse will become deplorably ugly as a yearling. By the time he’s two or three, the colt will be back to his good-looking self.

- Foals’ short, thin manes and tails will be long and full like an adult horse’s when they are about one and a half years old.

- At birth, a foal’s little hooves are encased in a soft, white covering. This covering prevents the foal’s hooves from hurting the mare during the gestation and birthing process. As the foal gets up and walks around, he’ll painlessly break the covering off within a day or so.

- While cows, which are of similar size to horses, are pregnant for only nine months, horses gestate for a much longer time. It takes a little more than eleven months for a foal to develop in the womb.

- In domestication, foals are taken away from their mothers – weaned – around the age of six months. Even in the wild, though, a mare – especially if she is pregnant – will often wean her foal herself by chasing it away whenever it tries to suckle. This usually happens later, around eleven or twelve months of age. 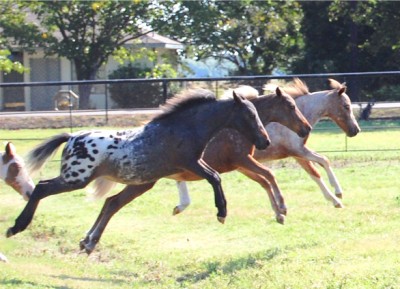 A Four-Legged Symbol of Life

When driving around the countryside in the spring, one is likely to spot a foal or two in a paddock by the roadside. These beautiful, lively little creatures are always on the go, whether they’re play-fighting with their friends or just galloping circles around their mothers for the fun of it. Always ready for a game, foals constantly exhibit the sheer, simple joy of being alive. Prancing and leaping on their long and fragile legs, eyes alight, fluffy tails sticking up in the air, foals are a classic and beautiful symbol of life. 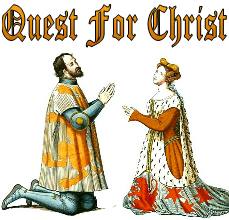