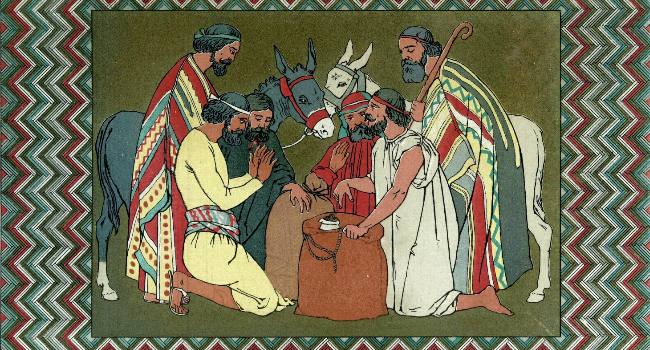 Donkeys in the Bible

Who hath sent out the wild ass free?

Or who hath loosed the bands of the wildass?

Whose house I have made the wilderness, And the barren land his dwellings. He scorned the multitude of the city, Neither regardeth he the crying of the driver. The range of the mountains is his pasture, And he searcheth after every green thing. Job 39:5-8 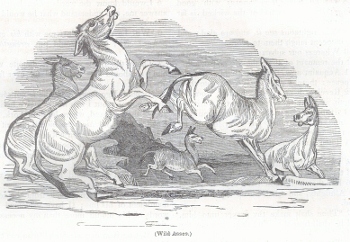 we find donkeys serving behind the scenes and helping where needed.  Even to this day, donkeys are considered reliable helpers, surefooted on mountain terrain, physically hardy in harsh environments and very strong burden carriers.

In Bible times, donkeys were a symbol of industry, peace and at times, wealth, while, horses were the sign of wealth, war, power and the strength of a military force.  It is interesting to read that God commanded the Israelites not to gather horses unto their nation or to go to Egypt for them (Deuteronomy 17:16—the Israelites eventually disregarded both commandments; Solomon had thousands of horses, built cities that centered around his horse stables and founded a large industry of horse trade between Cilicia and Egypt).  This horse restriction was for this chosen peoples' good.  Israel was unique among the nations as they had the great Lord Jehovah to fight their battles.   The Lord did not desire His nation Israel to trust in horses and chariots, as did Egypt, nor to turn to worshipping them, as did happen with the wicked kings of Judah in 2 Kings 23:11.  However, we find that the Lord provided His people with the donkey who was the real "work horse" and better suited to represent and assist in the life the Lord desired the Israelites to live.

Donkeys hold the distinction in the Bible as being one of the earliest and most frequently mentioned animals in the text.  We find most of the Old Testament's great historical events include donkeys in the backdrop plodding along.

Abraham got up early in the morning to saddle his donkey, a small act, yet one of obedience to the Lord in order to offer Isaac up to God (Genesis 22:3).

Jacob sent twenty female donkeys and ten donkey foals as a portion of his large and costly gift to appease his brother Esau (Genesis 32:5).

The sons of Jacob traveled to Egypt with donkeys to purchase grain during a great famine (Genesis 42:26).

Moses, in his return to Egypt to be Lord's representative to cause Pharaoh to release the Israelites from slavery, placed his wife and children on a donkey to cross the desert (Exodus 4:20).

Abigail, a virtuous woman, made haste to prepare food for David and his army, who were preparing to fight her wicked husband, Nabal. In 1 Samuel 25:18, Abigail instructed that a caravan of donkeys be loaded with 200 loaves of bread, 2 bottles of wine, 5 carcasses of prepared sheep meat, 5 measures1 of parched corn, 100 clusters of raisins and 200 cakes of figs.  Abigail herself made haste as she rode a donkey out to meet David and his army. It is through her humble Christian actions that she was able to soften the warrior David's heart and keep him from warring against Nabal's household (1 Samuel 25:20, 23; read 1 Samuel 25 for the whole fascinating story of Abigail).

In the book of Job, the donkey is one of the fourteen animals that the Lord uses to illustrate His power and creativity to Job.  The Lord says, 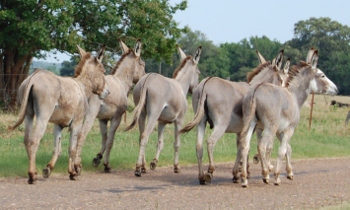 Donkeys on the Run by Rebekah L. HoltWho hath sent out the wild ass free? Or who hath loosed the bands of the wild ass?  Whose house I have made the wilderness, and the barren land his dwellings. He scorned the multitude of the city, neither regardeth he the crying of the driver. The range of the mountains is his pasture, And he searcheth after every green thing (Job 39: 5-8).

This scripture allows us to understand that the Lord has made this wilderness the "house" of the donkey, giving us just one example of the Lord's creativity in forming the donkey with the ability to adapt to his environment.  This passage also shows how the Lord has made provision for even the wilderness to be inhabited and maintained.  The fact that the wild donkey "scorneth the multitude of the city" and "neither regardeth he the crying of the driver" just reminds us of how the Lord placed the fear of man on every animal after the Great Flood in Genesis 9:2:  "And the fear of you and the dread of you shall be upon every beast of the earth, and upon every fowl of the air, upon all that moveth upon the earth, and upon all the fishes of the sea; into your hand are they delivered."

The donkey also is one of the two animals that the Lord enabled to verbally speak in the Bible. The first animal was the serpent in the      Garden of Eden, controlled by the devil, which deceived Eve to disobey God.  This serpent is recorded to have had verbal communication with Eve.  The Lord in turn audibly cursed the serpent, reducing him to crawl in the dust, legless, in Genesis. 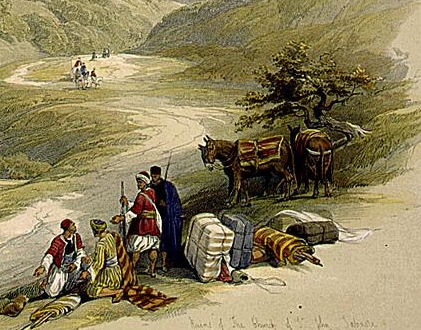 Travelers to Bethany by David Roberts, 1839 (PD 1923), Old Book Art   Balaam's donkey is the second and last animal recorded in the Bible to speak audibly to a human by the Lord's enablement.  Balaam was a mercenary prophet that was hired by the enemies of Israel to pronounce a curse upon this entire nation. Against the Lord's commandment, Balaam accepted the job and traveled by donkey to the place the Israelites were camped. This Balaam's disobedience angered God. He sent His angel to stand in the path that Balaam was traveling as an "adversary against him."  The Bible tells us, "And the ass saw the angel of the Lord standing in the way, and his sword drawn in his hand:  and the ass turned aside out of the way, and went into the field: and Balaam smote2 the ass to turn her into the way..." (Numbers 22:23).

In Numbers 22, three times it is recorded that the angel of the Lord stood in the way of Balaam and his donkey.  Three times it is recorded that the donkey saw the angel of the Lord and redirected the path.   And three times it is recorded that Balaam grew violently angry and struck his donkey, the third time with a staff.  After this third blow, "... the Lord opened the mouth of the ass, and she said unto Balaam, What have I done unto thee, that thou hast smitten me these three times?" Balaam was so enraged that it was no  novelty that his donkey was speaking to him!  He answered, "...Because thou hast mocked me: I would there were a sword in mine hand, for now would I kill thee.  And the ass said unto Balaam, Am not I thine ass, upon which thou hast ridden ever since I was thine unto this day? Was I ever wont to do so unto thee? And he [Balaam] answered, Nay."

Balaam's wrathful abuse of his donkey can capture our attention.  The Lord sees the abuses of man upon His creation. While there was more at stake in this historical account than a donkey being abusively treated, it serves to remind us that we hold a responsibility to be good stewards of God's creation as we are instructed in Genesis 1:28.  Proverbs 12:12 tells us, "A righteous man regardeth the life of his beast: but the tender mercies of the wicked are cruel."  The Lord sees our actions and takes into account the way we manage or treat the people that are in our lives and the animals and possessions that we own.  "The eyes of the LORD are in every place, beholding the evil and the good"  (Proverbs 15:3).  Soberly, we must consider that we will one day stand before the Lord to give account for our actions here on earth. "We shall stand before the judgment seat of Christ.  As I live, saith the Lord, every knee shall bow to Me, and every tongue shall confess to God.  So then every one of us shall give account of himself to God" (Romans 14:10-12).

The most unforgettable Bible donkey event was when the Lord Jesus Christ rode a donkey colt through the city of Jerusalem.  This donkey ride had been prophesied for hundreds of years before the actual event. "Rejoice greatly, O daughter of Zion; shout, O daughter of Jerusalem: behold, thy King cometh unto thee: he is just, and having salvation; lowly, and riding upon an ass, and upon a colt the foal of an ass" (Zechariah 9:9).

An animal which had never before been used was one which had been set aside for some sacred purpose, such as the "heifer . . . upon which never came yoke" (Numbers 19:2), to be offered up as a sacrifice, or the two oxen used to draw the wagon carrying the Ark of the Covenant (I Samuel 6:7). The fact that the colt had not been broken or trained to allow riders posed no problem for the King—the Creator of all animals. The colt submitted to his Master's touch.3

Equine trainers appreciate the illustration of Christ's Divine touch being all that was needed to train this colt to navigate through a street of "obstacles".  Jesus Christ's entry was a parade full of shouting, happy people waving palm tree branches and draping their robes along the path.  For any equine trainer—we can appreciate the novelty of an untrained colt not shying from walking across strange footing, nor spooking at the noise and activity of excited people.  For most equids, it takes years to learn to tolerate such a scene and to overcome the flight nature so instinctive for their kind.  Yet, for the Creator Who instills in humans the knowledge to train animals, He can gain full trust from His creatures by merely a touch. 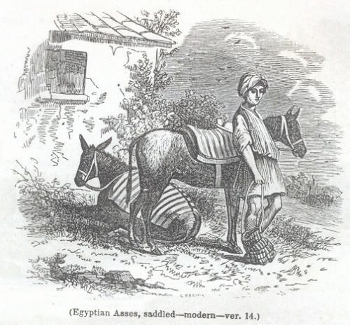 (PD/1923), Old Book Art Christ as the King of Kings to enter in Jerusalem on a donkey was a lowly action.  In today's terms, to select a donkey instead of a horse could be compared to a prince selecting a furniture delivery truck over a rare luxury sports car!   Historically, horses are the equine thrones of victorious Kings and Princes.  Haman in the book of Esther considered riding the king's horse in fine clothes, to be attended by noblemen and to have personal praise heralded to a crowd to be a great honor.   Even today, we would expect such a procession of royalty.  Yet, in Jerusalem, to be astride a donkey was commonplace.  Donkeys typically served as everyday transportation, a long-eared daily sight to be seen in the streets.

In following Christ's example, when serving the Lord, our focus should be on obeying Him with lowliness and humility.  Thinking of the Christ riding a donkey, as Christians, our aim should not be to capitulate to the lust of the flesh, the lust of the eyes and the pride of life (1 John 2:16).  "The world passeth away, and the lust thereof; but he that doeth the will of God abideth forever" (1 John 2:17).

Donkeys in the Bible and today—as an animal, they have served us well.   May we be like Christ's donkey, willing and set aside, patiently waiting for our Master's touch that we may fulfill the tasks the Lord has ordained for us to accomplish.

1.  It is suggested that this measure of parched corn was the full capacity of what a donkey could carry, which roughly, could be close to 55 gallons of grain.

Equus in the Bible 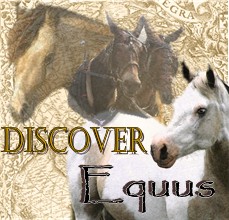